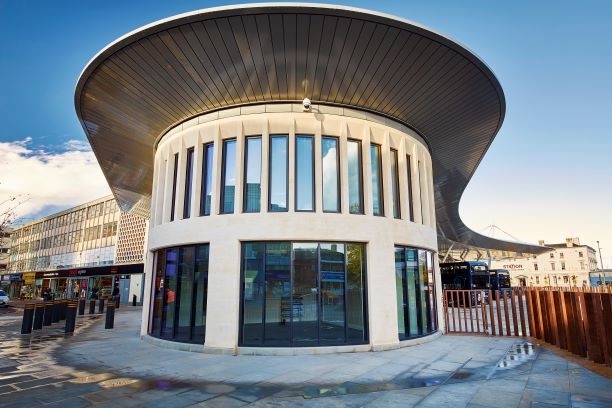 Gloucester have a new £7.5 million bus station which opened at the end of October 2018. It's the first step in the Kings Quarter regeneration scheme planned for the area and the bus station was designed by architects BDP.

BDP designed the building with a single roof plane resembling an aircraft wing referencing Gloucester’s unique aviation history. The wing has an aerofoil section allowing light to punctuate through at various points in the building. Hartham Park Bath Stone forms the main hub of the terminal and there's also a specially commissioned glass frieze within the concourse, designed to illustrate a timeline of Gloucester.

Lovells Stone Group supplied the raw blocks of Bath Stone to Stokes Masonry, who worked with Kier to build the bus station. They ranged in size from 2 to 10 tonne blocks - the bath stone ashlar with hand worked heads and jambs by Stokes Masonry makes for a really striking appearance against all the glass and steel used on the building.

For more information about our products and services, or to request stone samples, please contact us:
t: 01929 439255
e: sales@lovellstone.com